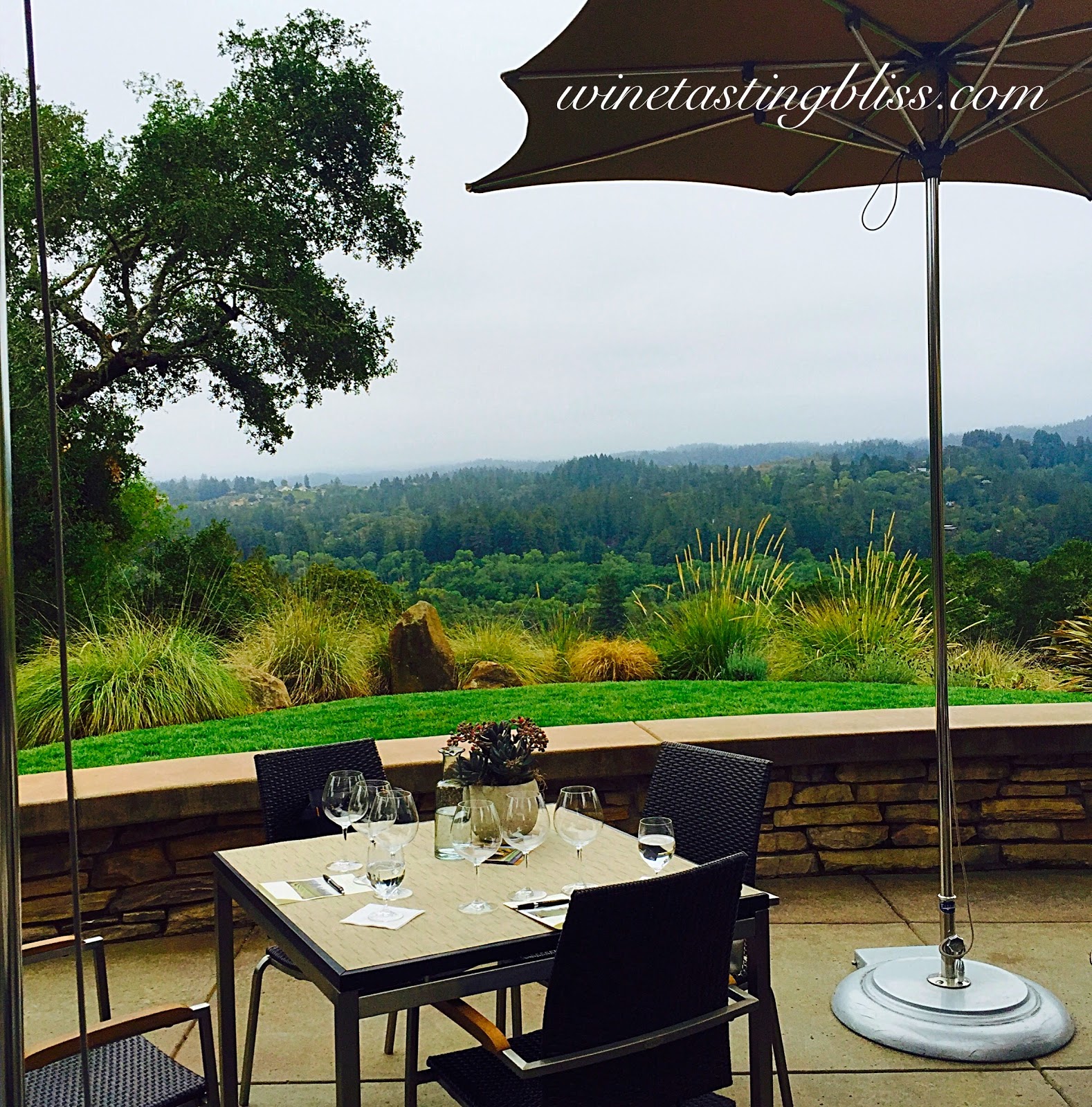 Not many things can get me out of bed “early” on a Saturday, but wine tasting is definitely at the top of the list. Katy had scheduled us an appointment at 10am at Gary Farrell, which was down the road from our fabulous studio and up a long hill, but don’t let that turn you off because it was well worth it! When we pulled up I noticed how modern and sleek, but warm the property was. We were greeted by a lovely lady who checked us in and lead us to a table on the terrace.  As soon as I turned the corner my jaw dropped. What a breathtaking view and a brilliant way to start the day! I could not stop commenting on how gorgeous the view was. We began with a flight of white wine accompanied by a delectable cheese platter. The 2012 Westside Farms Chardonnay was creamy with a hint of oak and was friendly with the first cheese, abbaye de belloc, a combination of cow’s and sheep’s milk, that was a bit sour, but the wine brought it to a nice point. The bright, crisp and clean of the 2013 Bacigalupi Vineyard Chardonnay was a refreshing change to the typical oak and butter flavors of a chardonnay. This was paired with the honey bee cheese which is a goat’s milk gouda. This cheese quickly became an obsession (I think more for me than Katy) and I wanted to run into the kitchen and grab all they had on stock. The chardonnay enhanced the honey flavor, but did not make it overpowering.

Side note, this cheese is impossible to find. Even my fancy-smancy new Whole Foods doesn’t carry it, nor is it in their data base. Fortunately, we were able to learn the cheese was purchased locally at The Cheese Shop in Healdsburg. Guess I know my first stop when I’m back in Healdsburg.

Our final and third white was the 2013 Rochioli Vineyard Chardonnay. It was a very light California chardonnay that when paired with the honey bee (cheese, not the hit song by Blake Shelton) turned the wine into water. (Wait. Isn’t it supposed to be the other way around?!).  Either way, it was a great end to the white wines Gary Farrell had to share with us.

The three pinot noirs on our tasting menu were so mild compared to most pinots due to the cooler climate in Sonoma that I was able to appreciate them a lot more. 2012 Stiling Vineyard Pinot Noir – only 433 cases produced, 2013 Hallberg Dijon Clones Vineyard  – little earthiness to the finish and the 2013 Toboni Vineyard which had a sweet, fresh juice scent.

Since Katy is a woman about town, or I should say about wineries, we were able to go on a tour of the winery during crush! I was blown away when Lisa said everyone was working hard just around the corner because it was so peaceful where we were. However, the hard-work was just beginning for their team to prepare for this years wine and we were off to another winery!

About the Author: Sarah's philosophy is that every occasion; a wedding, job promotion, Friday night after a tough week or even sitting at a Pai Gow table in Las Vegas should be celebrated with a glass of bubbly in hand. Her reviews will be casual, just like her. Descriptions will be basic and typically consist of a great place to drink said wine.