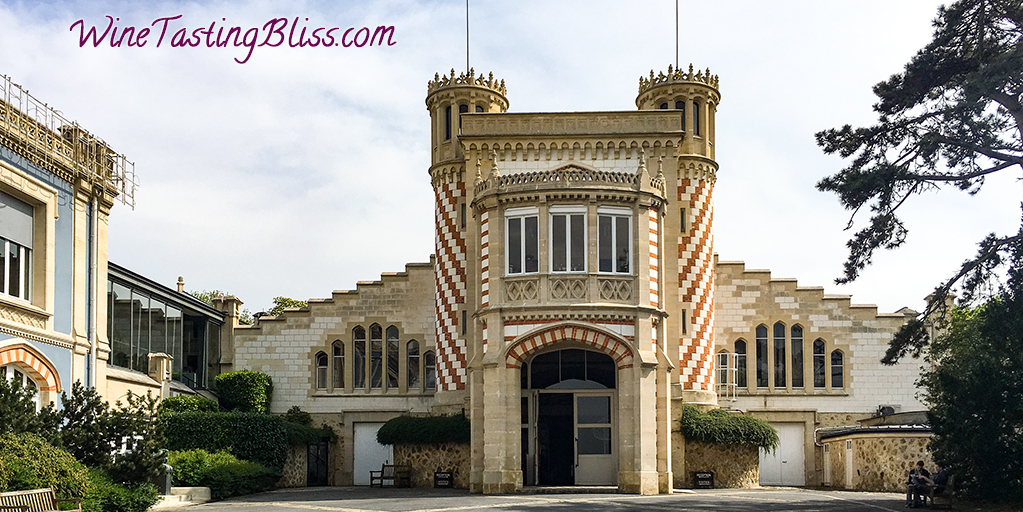 After a great tour and tasting at Champagne Taittinger, we decided to tour one more high-profile champagne house. Without hesitation, we made our way to Champagne Pommery. 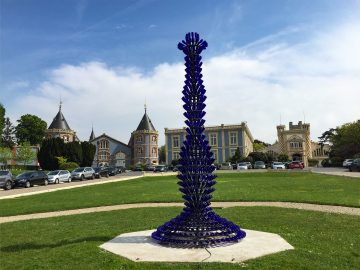 We arrived at Champagne Pommery and found a place to park along the wide, looping driveway. The happy tasters pouring out of the visitors’ center confirmed that our choice in tour destinations was on point. We entered the visitors’ center and purchased our tour tickets. Tours were available in a wide variety of languages, so we had some time to look around before the English language tour began. 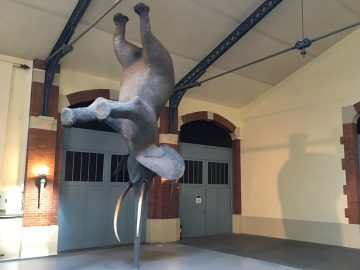 We soaked in the ambiance of the waiting area. Clearly, “not to scale” was a strong theme for their decorator. First, there was an over sized elephant balanced delicately on his trunk. This art piece was a magnet for every visitor who entered, especially those visitors far too young to taste the champagne. A number of youngsters spent quality time posing for pictures in front of the pirouetting pachyderm.

Another fun piece was this “not to scale” wine bottle cage, called a muselet. 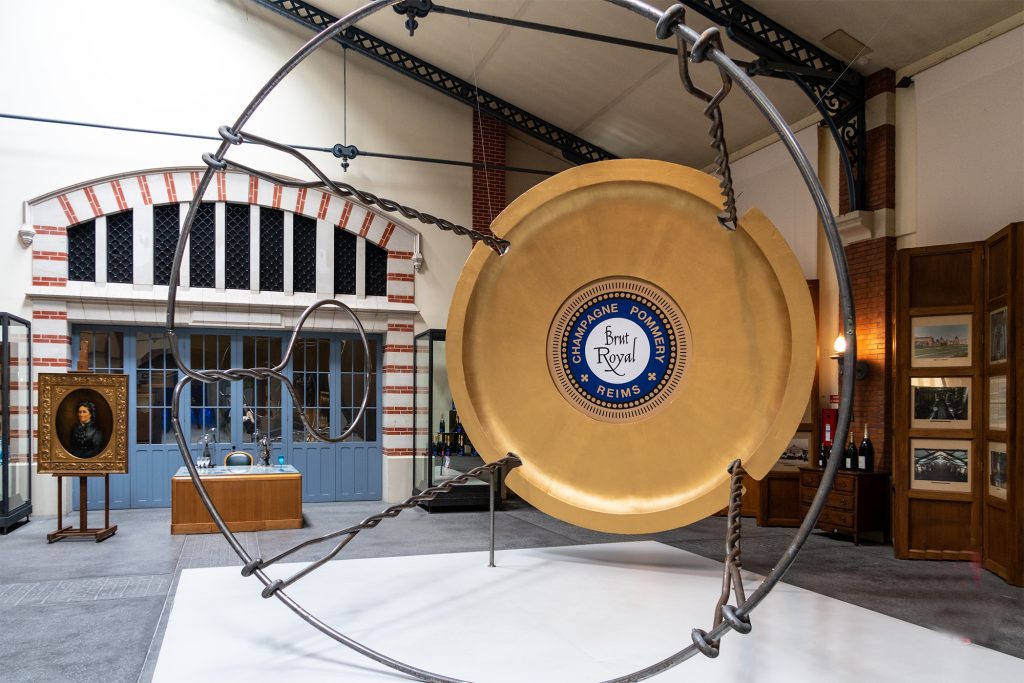 Before long, tour guide Ariane called together our English language tour. We collected together and made our way down what could well be the longest stairway in Reims, to the cellars and the 20 million bottles of champagne below. 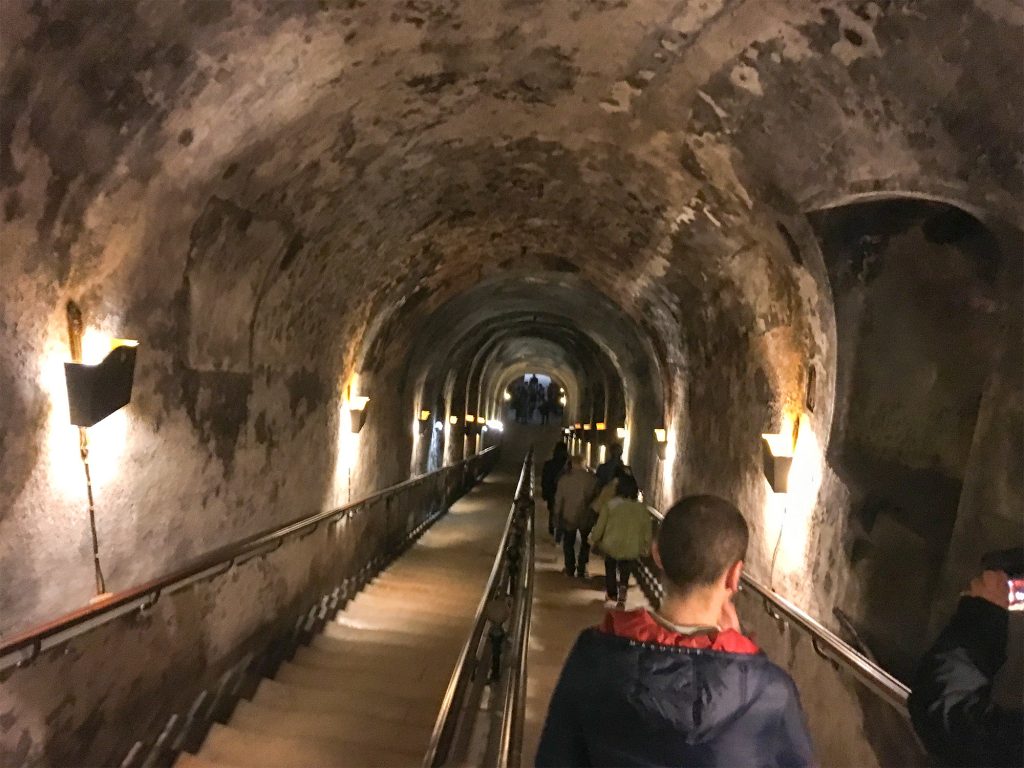 As we stood at the feet of a bas relief sculpture by Gustave Navlet, Ariane gave us some background on Champagne Pommery and Madame Pommery herself. We learned that Madame Pommery’s life arc was quite similar with that of Madame Clicquot. Both lost their husbands at an early point in their marriage. Both chose to carry forward the work of their family as the head of a champagne house. In both cases, things turned out pretty well! Although not contemporaries, with Madame Clicquot starting her career in 1805 and Madame Pommery in 1860, they both took on a world that believed that women could not be successful in business and proved the world wrong.

We walked along the underground corridors, past relics of the past, like this overhead conveyor system that helped to transport champagne bottles from their storage cave to the mouth of the stairway. Happily, electric forklifts made this somewhat more rustic transportation system obsolete. 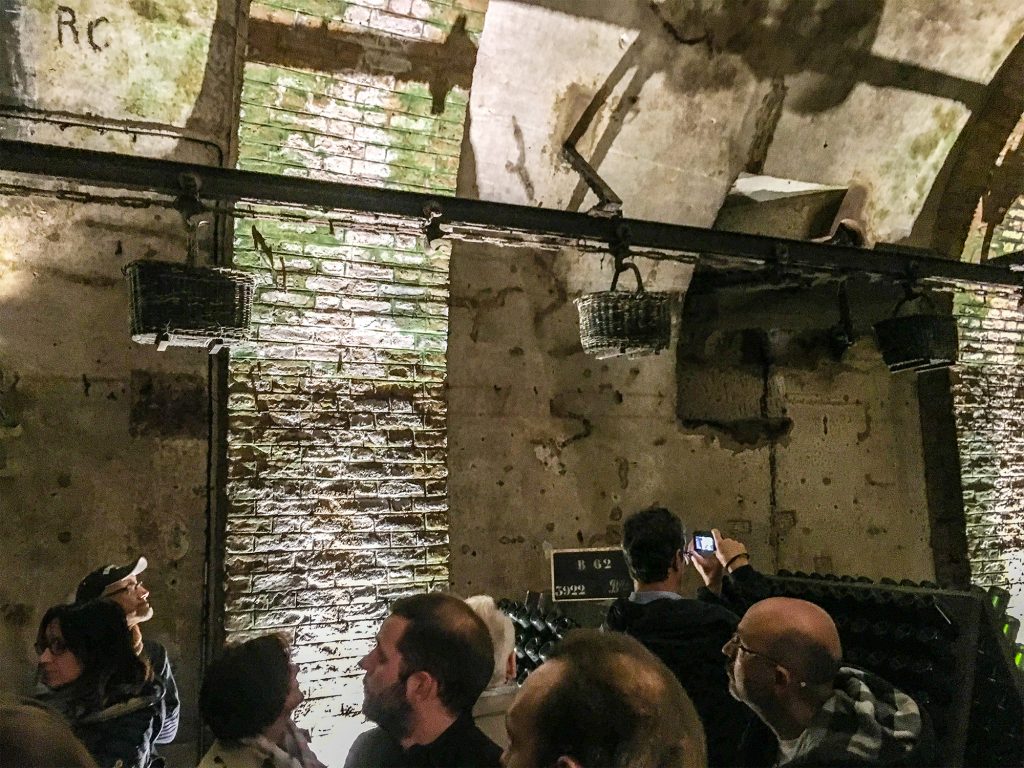 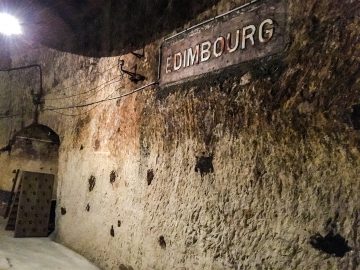 We walked further into the maze of passageways, past tens of thousands of dusty bottles of champagne, with each area bearing a sign evoking a far-distant location that was intriguing to Madame Pommery. With so many miles of tunnels, these signs are one of the few ways not to get hopelessly lost. Ariane had encouraged us to all stay together at the start of the tour, and the reasoning behind this request was crystal clear!

One of the major draws to touring Champagne Pommery was the promise of cutting edge modern art. We were saddened to learn that we were touring between installations. That meant that the rooms normally chock full of art were pretty much barren. We could see the intent, but we could not see the art. Travel tip: check in advance to see if there is a current project being displayed. If not, maybe pick a different house to tour.

Here is a panoramic view of one of the art pieces still in place: 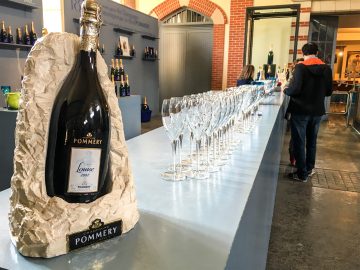 At the end of the tour, we climbed the amazing stairs again to re-enter the visitors’ center. As a great way to finish the tour, we were treated to a tasting of some Pommery champagne. The facility was very used to keeping large groups happy, so the array of champagne flutes was very impressive. We toasted the day of touring and the great success of Madame Pommery. Time to pick out a place for dinner!

Other wineries near Champagne Pommery: