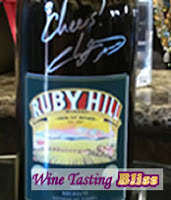 The Ruby Hill Winery sure knows how to throw a release party. We have started to adjust our social calendar to free up release party weekends. Given the fun that these parties deliver, I’m sure that our relatives understand. Don’t they?

This quarter’s release party featured their Intessa and Reserve Petite Sirah. Previous releases of these wines were judged (by us) to be yummy (I’m sure that’s a technical term used by Masters of Wine), so we were really excited about this new release. It didn’t hurt that the weather cooperated, with clear skies and mid-70 temperatures to make the members-only patio even more delightful.

Ruby Hill has studied the speed bumps that can affect their release parties and smoothed the process quite a bit. Now upon entry to the winery there are three lines to pick up your member’s wrist band. At that point you sign for your wine but don’t have to lug it around the party. Instead, they write a secret number on your wristband so that you can pick up your release pack on your way home. A wonderful accommodation!

We started with a few white wines to dial in our palates. Of course, that meant starting with their non-vintage sparkling wine. With summer approaching, we are checking our inventory of this delightful and refreshing libation. Sometimes we add a slice of peach or a raspberry for additional health benefits (that’s our story and we’re sticking to it). The members-only patio beckoned. That’s where they were pouring the Intessa and Reserve Petite Sirah, so that drew quite a crowd. Another happy bunch of people formed around pulled pork sliders. Quite a nice snack, pulled pork served up on a sliced Hawaiian roll. There were sliced sausages served at the opposite side of the patio to spread the crowd a bit, but the smart money was on the sliders, and the lines formed accordingly. Once we had carefully considered the new wines, especially in context with the sliders, we proceeded to the barrel room. As usual, Ruby Hill offered two barrel tastings. The first barrel contained 2010 Elevato. Not only was the tasting fun, it gave us a chance to chat with assistant winemaker Jon Frost. If you see Jon and want to make his face light up, just ask him some arcane question about his grapes, or his barrels, or this year’s crop. His enthusiasm is contagious. We also tasted some 2011 Cabernet Sauvignon from an adjacent barrel. Although nice, this is wine will benefit from more time in the cask. To us, this wine still has some sharp edges that should soften on the oak.

We completed our tour of the barrel room with a taste of their 2009 Elevato. This is a nice big brother to the 2010 Elevato still maturing in the barrel. Big shoes to fill, little bro!

And with that, we grabbed one last sip of the NV Sparkling wine, got our members’ wine package and headed home. See you soon, Ruby Hill!