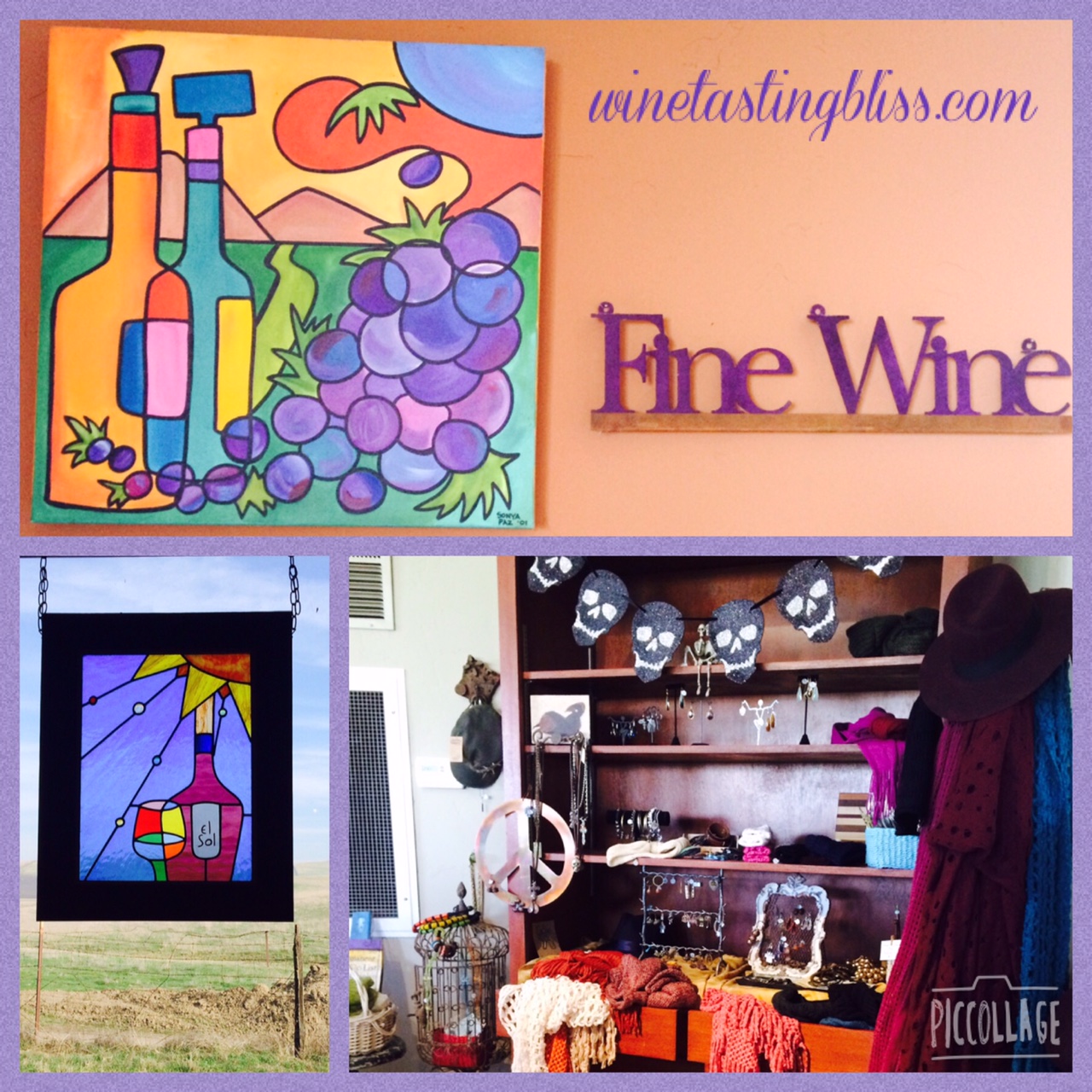 A mild fall Sunday afternoon was upon us and our husbands were ready to cheer on their teams (Fantasy, Raiders and 49ers). However, after a successful paint night (more on that later – #paintwithpurpose) taught by my best friend, Megan at my house, we were feeling antsy and thought a trip to a winery would be just the ticket.

Meg suggested El Sol and I was delighted by the idea since I do enjoy the vibe and wine, but ashamed at the same time because I needed to Google Map (RIP Mapquest) directions. Fortunately, nothing has changed and despite the Livermore Wine Trolley being there, we were promptly greeted by Hal who set us up at the bar.

We started the way every flight (wine or air) should start, with sparkling. The NV Grand Cuvee is a prosecco style with it being fruit forward and not too dry. I usually find prosecco stlye sparklings to be way too sweet, but this one found a nice balance. It would be fun to add a strawberry in the glass for an elegant touch and to make drinking multiple bottles a little classier. We followed this with the 2011 Sauvignon Blanc, which in my opinion was close to a Chardonnay. Next up was the NV Seat of my Pants that Lynn, our tasting director for the afternoon described as a fruit bowl. He was quite right! The nose had port written all over it, while the fruit was delicious on the palette. Megan selected the next wine, 2007 Tuesday Night Zinfandel, purely based on it’s name because as a mom everyday is Tuesday and everyday you can use a glass of Zin. This had slight leather on the nose, smooth when it hit the tongue and sharp at the end. The hints of blueberry made it an easy drinking wine. Lynn then surprised us with a GSM, which after tasting, learned that he made! El Sol has started a program where tenured wine pourers are allowed to experiment and make their own blends. Such a great idea! After the trolley party people came back in, we headed outside with Lynn to taste straight from the barrel. First up was the Three Vintage Blend Livermore Cab, releasing this month! It is everything you could want in a cab – acid, fruit structure and tiny amount of tannin. The wine thief  stole us a taste from the 2009 Livermore Tempranillo, expected to release in January 2016. The wine was fruity with great acidity, but doesn’t have a great finale if you are looking for that. Megan described it as a juice box, otherwise known as a perfect daytime drinking wine. I loved it as well and will be bringing back Rob (probably not on a football Sunday) to get his opinion and hopefully purchase! We wrapped up the tasting with the 2007 Sauvignon Blanc Tawny Port and the 2005 Touriga National Port and headed out so the staff could get ready for their (well deserved) holiday party. I definitely will not be allowing such a long gap between visits from now on! Thank you Lynn and Hal! #PaintWithPurpose – My best friend, Megan Cho is spreading her artistic abilities and information about Type 1 Diabetes. Meg comes to you with all the supplies to teach your group how to paint the selected painting. You supply the wine and food for your party and profits go back to JDRF and Megan’s two year old daughter, Everly’s diabetes supplies. If you’re interested in hosting a party (Northern California) comment with your email address or send me your contact information and I will put you in touch with Megan.

About the Author: Sarah's philosophy is that every occasion; a wedding, job promotion, Friday night after a tough week or even sitting at a Pai Gow table in Las Vegas should be celebrated with a glass of bubbly in hand. Her reviews will be casual, just like her. Descriptions will be basic and typically consist of a great place to drink said wine.

Other wineries near el Sol: