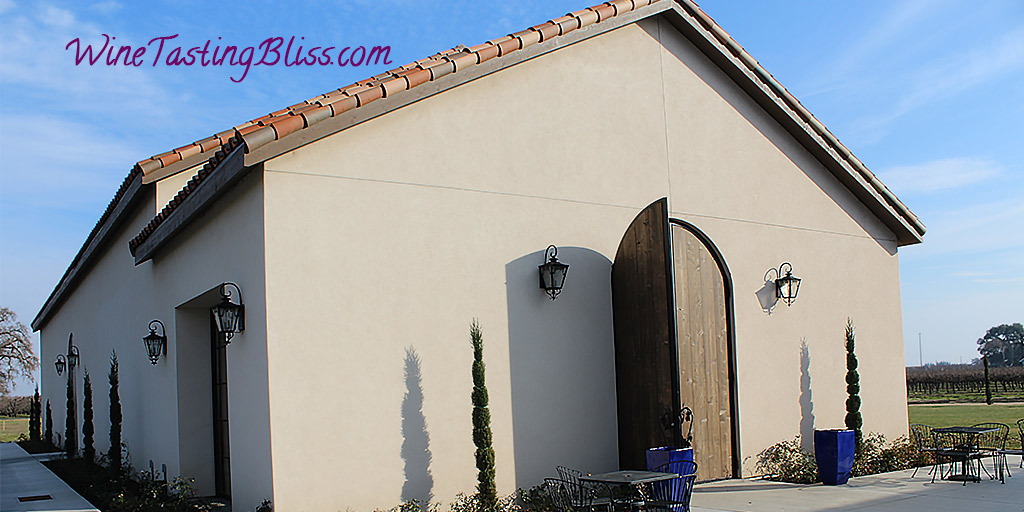 The Lodi wine region undergoes constant change, with wineries and tasting rooms popping up, morphing and (sometimes) disappearing. Popularity brings with it a lot of good challenges, and we were able to enjoy the fruits of one such challenge when we visited the sparkling new tasting room of Stama Winery. The Stama winery has been making wine in Lodi for over a decade. Considering the four generations of family winemakers in Greece, this might be considered a mere blink of the eye. But in that blink, their wine has grown in popularity to the point that a new tasting room was required. When we discovered them, the new tasting room had only been open for six months. We found a facility with a lot of promise, lots of room to grow, and enough enthusiasm to fill every nook and cranny. Everything about the new winery seemed to reflect an eye to the future. The parking lot was more than ample, the walkways broad and the outdoor seating generous. The tasting room itself was full of light from the huge windows facing the parking area. There was a nice L-shaped tasting bar with plenty of room for tasters. Our good luck avoiding crowds was going strong; we were nearly the only tasters. We met bubbly and outgoing wine guides Hillary and Sari and settled in for a nice tasting.

As we made ourselves comfortable, Sari told us a bit about the history of Stama. Owners Gus (father) and Frank (son) Kapiniaris started with a small vineyard in the late 80’s. Over time, their vineyard holdings on the east side of Lodi grew to over 200 acres. The Stama Winery was inaugurated in 2005 in Lockeford, with the winery’s name was derived by their ancestral surname, Stamatopolus. Over time, the original tasting room in Lockeford proved insufficient, so the new facility was born. We were standing in “Phase One” of a three phase development plan, with some great things to come through future construction, according to Sari. Talk about a great reason to return! We can’t wait to see how the rest of the development comes out. We started our tasting with a nice Rosé of Zinfandel and their buttery Chardonnay. Our group really perked up when we compared their 2009 Merlot with their 2012. The ’09 had notes of smoke and green tea, with tannins on the finish while the ’12 was youthful and edgy. Although we preferred the ’09, it was clear that the ’12 would be amazing in a few years.

We pressed on with a survey of their 3 Zinfandels. We compared a 2011 Old Vine Zinfandel, from 79 year-old vines, a 2013 “Zany” Zinfandel and a 2013 Winemaker’s Reserve Zinfandel, made from 90 year-old vines. Our group particularly loved the Old Vine Zin, with lilting hints of vanilla and coffee, plus the trademark pepper and tannins at the end. Quite a nice representation of Lodi’s best-known varietal. Our final head-to-head-to-head tasting was all Cabernet; pitting a 2005, a 2009 and a 2012 vintage against each other. The ’05, made from Napa fruit, had black cherry and tobacco notes that we enjoyed. The ’09 had an anise overtone that divided our group; half loving it and half not. The ’12 (called “Curvaceous”) showed nice complexity with hints of cherry over leather.

We finished our tasting with a Late Harvest Sauvignon Blanc. This was delicious, evocative of caramel apples. A nice alternative to a blond Port. One of these came home with us, probably to be featured beside some of Judi’s amazing pecan pie.

The sun was getting near the horizon, and we still had big plans on the wine tasting front, so we thanked Sari and Hillary and set off for our next winery. Where? Check back soon, but one hint: there’s a grove involved! Think you know? Post a comment with your guess!

Other wineries near Stama Winery: