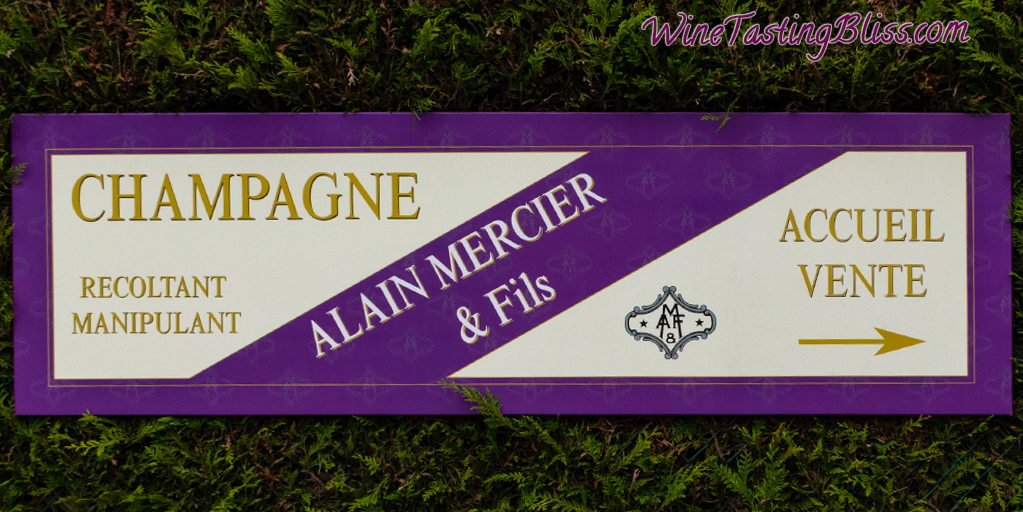 Making fine champagne is a unique blend of science and art. We recently had the pleasure of spending an afternoon with Romain Mercier, winemaker at Champagne Alaine Mercier.

Last February, we met Romain Mercier and Champagne Alaine Mercier at a wine marketing event coordinated by the Association pour la Promotion des Vins et Spiritueux en Amérique du Nord, conveniently known at  APVSA . The event brought together quite a number of French and Spanish wineries that were expanding their distribution into North America. We loved his champagne and promised ourselves that we would meet again. Months later, a wine tasting trip to France, and the very gracious Romain Mercier came together for an amazing afternoon of education on making champagne and tasting the wonderful results. 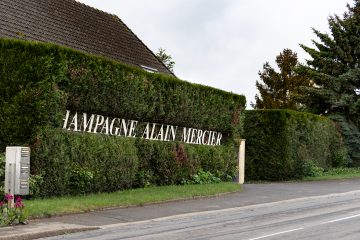 We arranged our visit through a series of emails. Romain had a wine festival in Paris during most of our time in the Champagne region, but agreed to meet with us immediately upon his return home. Romain is a 4th generation champagne maker. In the 1920s, great-grandfather Émile Mercier got the family into the champagne business. Lucien, the grandfather carried on the family business, then father Alain, and now Romain. So far there is not a 5th generation in sight.

Champagne Alaine Mercier is located near a beautiful small town called Passy-sur-Marne, about 45 minutes outside of Reims. As arranged, we arrived Monday afternoon. Well, it was almost afternoon. Romain gave us advice on finding a restaurant nearby, so we got some lunch and Romain a bit of time to get reoriented after working a weekend wine event. After a nice lunch, we returned to the champagne house and Romain took us indoors and began a complete review of everything involved in making champagne. Romain told us that Champagne Alaine Mercier is a Récoltant-Manipulant, which means their champagne is made from estate-grown grapes. Other alternative are: Coopérative-Manipulant, where a consortium of growers combine their grapes to produce under one or more labels;  and Négociant, where a champagne producer purchases their fruit from unassociated growers. 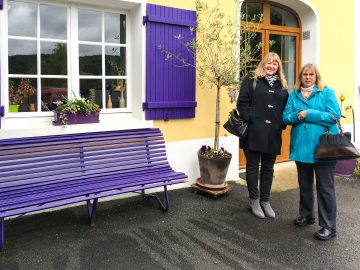 We learned that champagne production is a very regulated business. The Comité Interprofessionnel du vin de Champagne (CIVC), governs all aspects of production and enforces its mandates with a team of inspectors that can “drop by” at any time. The CIVC sets annual production targets for each champagne house, proportional to the size of their vineyard holdings. 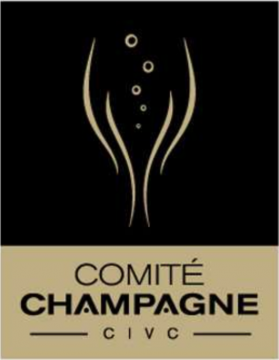 In years where the CIVC expects a robust champagne market the production quotas are increased, and during weak market years quotas are reduced. The champagne houses have no alternative to meeting these quotas exactly. Champagne Alaine Mercier has nine hectares (a bit over 22 acres) of grapes, evenly divided between Chardonnay, Pinot Noir, and Pinot Meunier, which is the basis for their annual production allocation. The CIVC announces the harvest dates, the quantity of grapes to be hand picked (the rest of the grapes are left on the vines) and the number of bottles to be produced from the grapes harvested.

We started our visit in the tank room. Romain said that each of the ceramic coated tanks holds the juice from one particular parcel in their vineyard. The soil in the vineyard changes dramatically from the top to the bottom. The entire area was an ocean in prehistoric times, leaving behind layers of clay and chalk. The top of the Mercier vineyard hill is mostly clay, and planted in Pinot Noir, which flourishes in soil that holds moisture. The middle of the hill, planted in Chardonnay, is a mixture of chalk and clay. At the bottom of the hill is the Pinot Meunier, in soil that is mostly chalk. Each tiny section of vines has its own soil, access to sunlight, and therefore, flavor profile.

We learned that the ceramic coating of tanks develops tiny scratches as it is cleaned every year. These scratches trap tiny air bubbles, and the oxygen helps develop complexity in the wine during fermentation. Next, we met the term “blocked wine” which refers to wine held back from production. This wine is used in succeeding years to cover harvest shortages and as a blending wine to help maintain the year-to-year consistency that is so valued by champagne makers. 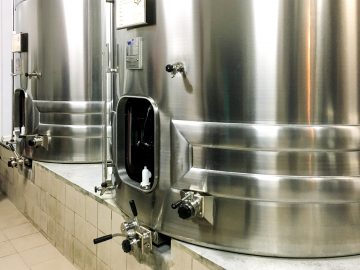 Romain said that the grape juice spends five days in a tank with yeast and sugar for first fermentation. For added consistency and shelf life, the young wine then undergoes malolactic fermentation. Once all of the tanks of wine are fermented and refined, it is time to blend the tanks together. Romain and father Alain independently taste the tank wine and decide on a ratio to use to blend everything together. Romain said that in the years that they have collaborated on the blend, they have always agreed on the formulation. 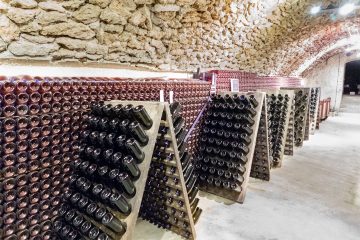 Once the blend is decided, the wine is put into bottles, along with more yeast and some sugar. The bottles are capped with a metal cap much like what seals a beer bottle. From there, the bottles move into the caves for aging. Champagne Alaine Mercier ages all of their champagnes for at least three years. That means that there are about 300,000 bottles of champagne being aged at any time. That’s a lot of cave space! Alaine dug additional tunnels 15 years ago to handle their increased volume. He chose to dig under their house, which was interesting for the family because of the soft, sandy soil involved. 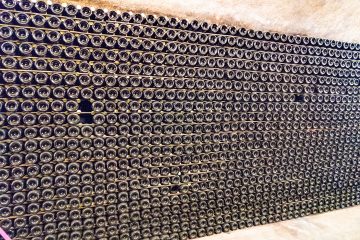 The yeast and sugar solution in the bottles causes a second fermentation. The yeast excretes carbon dioxide, which produces the carbonation that makes champagne so wonderful. This dissolved gas creates quite a bit of pressure, and the champagne bottles can sometimes break during aging. As we had seen in other caves, there were gaps in the stacks of bottles caused by shattered bottles. 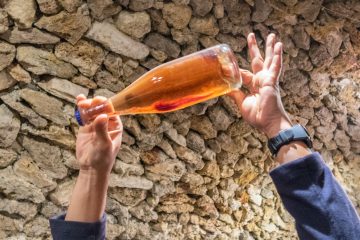 Another outcome of this secondary fermentation is the creation of lees. These lees contribute a lot of positive elements to the flavor profile of the champagne as it ages, but can also cause cloudiness in the final product if it is not removed. The removal of lees at the end of aging is a critical step in the production of champagne. 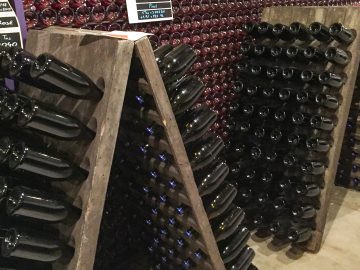 Manually twisting and tilting all these bottles can be replaced by a complicated machine called a gyropalette. This massive machine can riddle 540 bottles at a time. Because of the accuracy and precision of the gyropalette, riddling time can be reduced substantially. Today, hand riddling is only required for odd shaped or over sized bottles.

Once the aging and riddling processes are complete, it is time to remove the lees and put the final cork into the bottle. Expelling the lees is called disgorgement. This is done by placing the next of the champagne bottle in an extremely cold glycol bath. The champagne in the neck, complete with all the sediment, freezes. Next, the metal cap is removed and the pressure in the bottle shoots the frozen plug out of the bottle, along with a bit of liquid champagne. Each bottle receives a bit more champagne to fill the bottle and is corked.

The cork is secured to the bottle with a wire cage, called a muselet. and covered by a foil seal. Romain told us that champagne corks are quite special, made from two layers of virgin cork, with the main body made from reconstituted cork. Another surprise was the level of elegance expected of the machine that applies the foil seal. It must sense position of the bottle and the wire to create creases in exactly the right places so that the labeling is not obscured and the visual impression of each bottle is perfect.

We watched Romain’s sister operate the various machines for a bit as she prepared an order for shipment. The attention to detail and hand crafting was truly amazing.

It was time for a tasting, but that will have to wait for another article.

Other wineries near Champagne Alain Mercier: