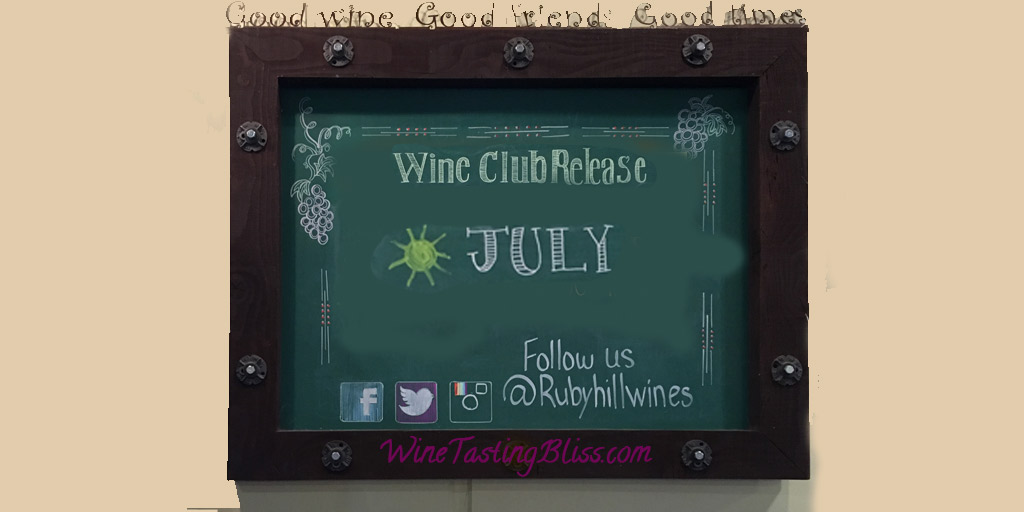 There is so much to love about summer! One of our favorite summer activities? Wine club release parties, of course! The great weather lets a winery really spread out the tasting stations, which helps with the crowd. Ruby Hill Winery’s club parties are VERY popular, so the addition space makes their summer parties truly amazing!

The Ruby Hill Winery has throwing a wine club release party down to a science. Check in at the front table, receive a wristband and claim ticket for that quarter’s wine selections, then proceed to a series of pouring stations. Each station featurs a wine and typically a snack which highlights the wine. After a half-dozen station, or so, the tasting circuit is complete, leaving you to collect your wines and head off. Easy as can be. The tasting stations are spread out to thin the crowd and the more than adequate staff ensures smooth operation of their time-tested model.

Our first pour of the summer release party was their 2015 Grapeful White. This “taste of summer in a bottle” blend contains 50% Sauvignon Blanc, 20% Trebbiano, 20% Pinot Grigio and 10% Vermentino. Paired with some sharp cheese, this taste showed everything good about summer in California. Light and refreshing with plenty of fruit (especially some bright citrus notes) to stand up to food. We found a nice table on the Members Only patio and settled in. Blue skies, a gentle breeze, and fine wine. Fifteen minutes into the party, and we were already having a wonderful time. 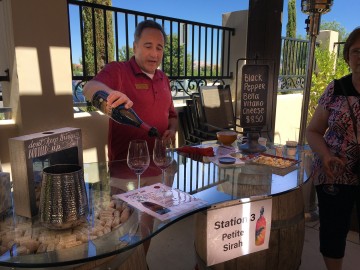 The next tasting (Station 3, if you are keeping track) was their 2013 Petite Sirah. We liked the pitted fruit notes and gentle tannins. We thought that this wine was nicely drinkable now, with loads of potential in the coming few years. This was paired with Black Pepper Bella Vitano cheese that played a nice counterpoint to the spice and coffee notes in the wine. 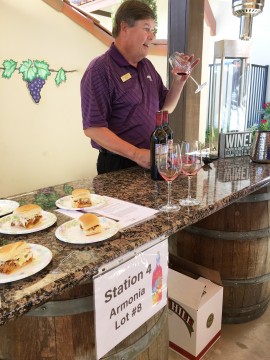 Their Armonia Lot #8 (a multiple vintage blend of 60% Cabernet Sauvignon, 20% Petit Verdot, 12% Malbec, 4% Merlot and 4% Cabernet Franc) was poured at the next station. This edition carries forward the proud tradition of previous versions of Armonia, with a lot of dark fruit and floral notes. It was paired with pulled pork sliders, with a crisp slaw on top that really balanced both the wine and the pork. Definitely the most popular food pairing of the day! We still have some Armonia #4 and #5 in our collection, and we look forward to adding some #8. This wine has nicely balanced acids and tannins, so it should cellar quite well! 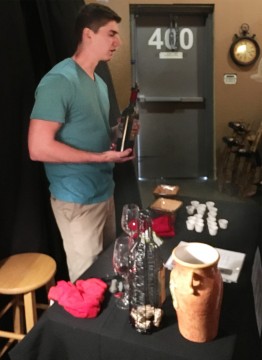 We moved indoors, into the barrel room, for some additional tastes and conversation. Station 5 was pouring their 2012 Elevato, which they called their “Final Vintage”. A blend of 40% Cabernet Sauvignon, 25% Merlot, 20% Cabernet Franc, 10% Malbec, 5% Petit Verdot, the winery has announced that they will no longer produce a wine under this moniker. We have been saving a 2010 Elevato for just the right occasion, and may add a few 2012 vintages to keep it company. Amazing depth and complexity with a soft finish, unblemished by pepper or overwrought tannins. 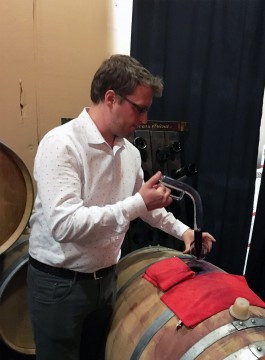 Station 6 featured Intessa from the library collection. They offered an intriguing “compare and contrast” opportunity, pouring from a freshly opened bottle and a decanted bottle. Surprisingly, our group was divided as to which taste was superior. A party of cherry, blackberry and raspberry notes, all resting on a bed of leather. Either way you drink it, you will not be disappointed.

The final tasting station offered a preview of their 2014 Petite Sirah, right out of the barrel. Although not ready for sale, this “baby” wine showed some great promise. This is one of our favorite Ruby Hill varietals, and based on our tasting, we have high hopes for this 2014 vintage.

Tasting complete (and all stations accounted for), we spent some time shopping and then picked up our wine at the convenient checkout table. Once again, Ruby Hill Winery exceeded our expectations for a wine club release. Cheers!