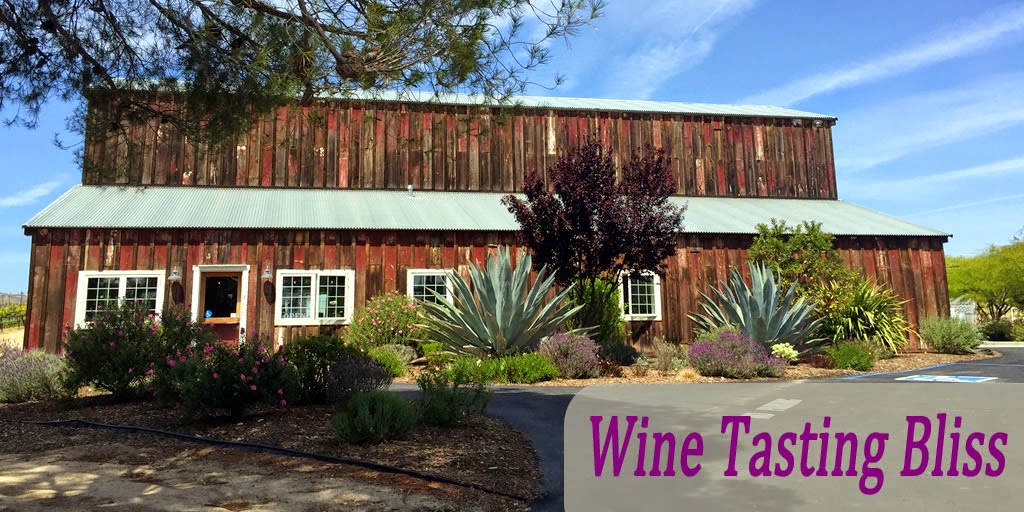 After nearly a decade away, we finally decided to return to Paso Robles. Granted, our trip was partially motivated by our desire to try out our new hard-top convertible on country roads with the top down. The weather forecast was promising, so we made some reservations and set off in our new wheels. First stop? The Terry Hoage Vineyards!

If the name Terry Hoage sounds familiar, you are probably a football fan. Terry was an NFL defensive back for 13 years, including a Super Bowl win. After an amazing football career, what could be next (after the mandatory Disneyland trip, of course)? Why, open a winery of course! So Terry and his wife Jen created the Terry Hoage Vineyards.

We made our way to the tasting room without incident, although we winced when we saw that the last mile of our journey was on an unpaved road. Goodbye dealership shine! Happily, we found the (paved) driveway and climbed the hill to the tasting room. What a beautiful setting! The rustic exterior gave way to an amazingly eclectic tasting room. A formed metal counter top and massive cut metal wall art, unique hanging lights; everything was different yet everything fit together into an energetic and uplifting whole. We were greeted by wine guide Maty, and we were off to the races!

We started with a 2014 Bam Bam Estate Rosé. We tasted hints of melon and a major mellow attitude. A great start to our tasting, and perfect for a summer sunset, Terry and Jen named it Bam Bam after a safety blitz play in football, thinking that the contrast between crushing the quarterback and a pink wine was too fun to miss.

Next up was a 2012 Cuvee Blanc called The Gap. This blend of Grenache, Picpoul, and Roussanne was a big hit with both of us. It takes a lot for a white wine to get two thumbs up from us, but this wine had us both wanting more.

Our next tasting was a comparison of two vintages: 2007 versus 2012 versions of a wine they call Skins, a Grenache (with a splash of Syrah to blunt the sharp edges) wine that got its name from the Super Bowl champion Washington Redskins. Their fans called them the Skins, so Terry called his wine the Skins, too. The 2007 vintage was an amazing balance of fruit, with a great development of flavors. The 2012 vintage will be just as great in a few years, if anyone has the restraint to wait that long. We next had the opportunity to compare the 2008 and 2012 vintages of the 5 Blocks Syrah Cuvee. The Syrah gets some support from splashes of Mourvedre, Grenache, and Cinsault. This cuvee was a big hit with us, too, with its fruit-forward attack and long, smooth finish. This wine could pair with just about anything! We were divided on which vintage we preferred, which is a great problem to have. It nearly came down to rock-paper-scissors before we settled on a bottle of the 2008 to bring home.

We could have easily spent another hour in this wonderful tasting room full of fun people pouring unique wines, but we had a full schedule and not a lot of time, so we paid for our wine and headed out. Maty was properly impressed by the Transformers-like actions that our car went through to fold up the roof and tuck it snugly in the trunk. Top down, we set off for our next tasting.

Goodbye Maty and the Terry Hoage Vineyards, thanks for a great time!

Other wineries near Terry Hoage: