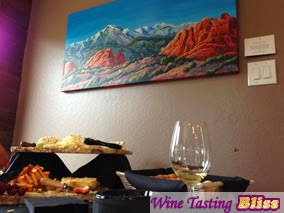 We have visited the Darcie Kent tasting room several times. We love the wine, love the art (so much that we have one hanging in our living room) and love the friendly staff. With all that to love, we became wine club members almost immediately. Last weekend was our first chance to attend a club party. Now we have something new to love!

We arrived to find that we were “late to the party” in a serious way! The party was in mid-flight, with a nice man in reflective gear coordinating the parking (thanks, it made getting out later A LOT easier) and an easy path to the check in station. We got our glasses and began the afternoon of sipping, browsing and munching.

We started in the white wine room, with the new 2012 DeMayo Chardonnay. This became our favorite new Chard within two sips. Made in the new style, this had lots of fruit and very little butter, right in our wheelhouse. We immediately noted this release as one that should follow us home! The room also feature some nice cheese and crackers, but the highlight was the natural-border granite slabs that served as trays. Beautiful!

We moved on, into the main tasting room. Surprise! The art was all new! We are certain that we already purchased Darcie’s nicest oil, but there were some great new contenders on display. Hmmmm, we DO have some more walls at home, right?

Our first red wine tasting was the 2010 Picazo Merlot. Our plan was to compare and contrast it to the 2008 Picazo Merlot which was on a case sale. The 2010 was amazing! Nice and light, with the grape up front. No real tannin or acid finish to get in the way. This received a big STAR on our tasting sheet so that we would remember to bring some home.

The back porch featured live music! A real plus for any wine party, Darcie brought in Tumbledown House, a duet described as “modern speakeasy music” and I described as a whole lot of nice. Nothing complements good wine and good food better than live music, and Gillian Howe and Tyler Ryan Miller made it truly special.

We were then able to snag one of the patio tables out on the front porch. Wow! What a beautiful day for a wine party! We drank in the spring weather, the green hills and the wonderful Merlot. Life is good!

We then tasted the 2008 Picazo Merlot, which was being offered at $120 a case for the party. An amazing price, but we found that we had been spoiled by the 2010, to the point that the shocking price difference ($120 vs. $336) could not overcome our tasting preference. Oh well, that’s a nice problem to have, isn’t it? Having to choose between amazing Merlots?

During this very scientific, head-to-head Merlot comparison we were treated to passed hors d’oeuvres. First came some nice veggies on a crostini, and then our favorite of the day, meatballs on bamboo skewers! The snacks were so beyond our expectations that I had to find who was catering. It turns out that the garage was converted into a catering prep kitchen, filled with the nice folks from Cabana Dave’s, also called On the Vine Catering. Despite my furtive attempts, I was unable to learn the recipe for the meatballs. Dave Victor, the General Manager, definitely has some culinary skills!

Our last favorite of the day was their 2011 Monterey Pinot Noir. Again, a big star went on our tasting notes, as this one really needed to come home with us! Light and playful, this is a wine for sipping pool-side. Hints of citrus zest with a blackberry finish, this could become so popular that it won’t ever make it to a case sale. Again, a nice problem to have.

We sampled the 2008 Madden Ranch Petite Sirah which was also on a case sale. Surprisingly young yet for a 2008, we enjoyed the grapefruit and grassy notes. We also liked the zesty 2010 Syrah and the silky 2010 Madden Ranch Cabernet that was available for tasting if you said, “Kitty sent me.”

We had tasted our way around the room, so it was time to head off. We checked in at the wine pickup table and got the happy surprise of the day! Our three favorites, the 2012 DeMayo Chardonnary, the 2011 Monterey Pinot Noir, and the 2010 Picazo Merlot, were in our club box. Woot! We put stars on three wines and somehow these three wines were in the club release. What a happy happenstance.

Thank you Darcie and crew! You put on a great release party. Can’t wait for the next one!