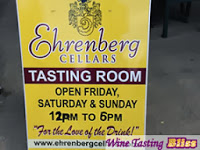 Serendipity is a wonderful thing. For those of us not versed on our SAT words, serendipity describes the wonderful moment when you discover something nice without looking for it. We were spending our afternoon wine tasting (which is already finding something nice) when we stumbled upon the grand opening for a new winery. What could be a better use of the term serendipity?

We were cruising down Tesla Road and decided to visit Tesla Vintners again. It had been years since our last visit so we thought we would catch up on what they were up to, wine wise. As we drove in, though, we discovered that their parking lot was now shared by a new winery: Ehrenberg Cellars. Their banner proudly proclaimed their grand opening, so we couldn’t resist dropping in. Sorry Tesla Vintners, we will try again next time. Ehrenberg is a new winery in name only. We learned that the wine maker had followed the traditional path of making wine in the garage, then in some borrowed space, and finally decided to get licensed and do the winery thing commercially. Some of the wine labels were drawn by a very creative 8 year-old. What we tasted certainly demonstrated that this is not their first time at bat.

We started with their Pinot Grigio, which they call a “Swirl.” The term really fits, because the wine adds 7% Gewurztraminer and 6% Riesling to the Arroyo Secco Pinot Grigio. This created a wine with some grassy hints and lots of apricot and lemon notes. We’re thinking hot summer afternoons by the pool! Their second Swirl is a red. In this case, 60% Syrah, 30% Zinfandel and 10% Nebbiolo join together to create a well-balanced and extremely drinkable red table wine. Lots of fruit (raspberries?) and a party down the center of the tongue. This can stand up to a steak!

We moved on to their 2010 Zinfandel from Shenandoah Valley in Amador County. Their 2008 vintage of this wine won a Gold Medal in the Chronicle wine competition. Since they actually produced two 2010 Zins, this one was called “Zin 1” for our purposes. We found Zin 1 to be light on the spice/pepper with a lot of fruit. Just right for a backyard BBQ.

Zin 2 was sourced from Lodi. The differences between the two Zins were striking. Zin 2 had a floral, plum nose with an aggressive fruit start and a low-pepper finish. We liked this one a lot, but thought that we would lay this down for another year.

We finished up with their 2010 Petite Syrah. These grapes were sourced from Michael David’s vineyard in Lodi. A truly wonderful wine! A hearty Syrah with nice berry notes. We thought that the heat of the Lodi summer really came through in this wine. Nice tannins with something for every part of the tongue to celebrate. Before we left, we explored the grounds around the two tasting rooms. First we discovered that someone had succeeded in growing a Pomegranate tree in the yard! Beautiful and full of ripe fruit. Could there be some Pomegranate wine coming soon? We also enjoyed the hand-made wooden furniture that was all over. If you get a chance, spend a few minutes exploring as we did. A very fun cap to a very fun tasting.

We look forward to a lot of good things from Ehrenberg Cellars. Nicely done everyone!

Other wineries near Ehrenberg: