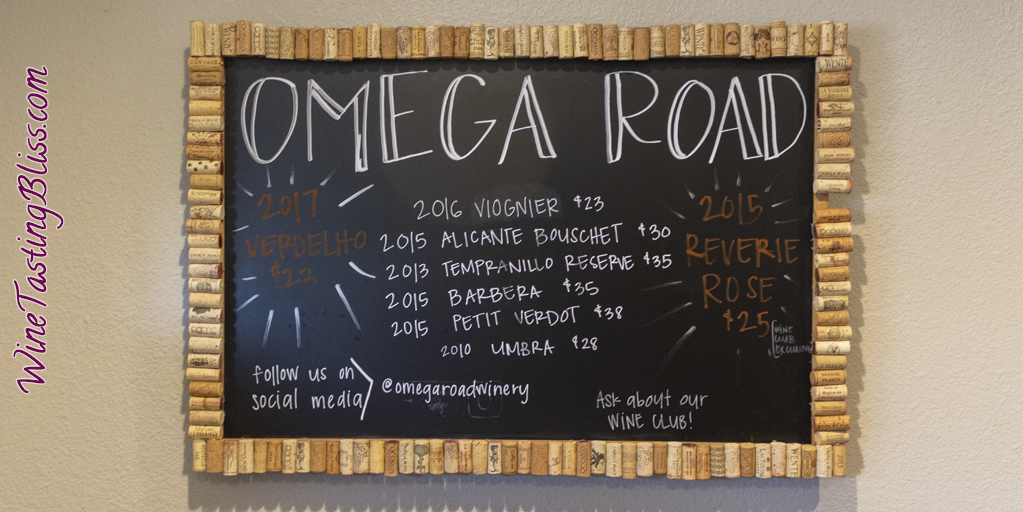 A new winery releasing some new wines — what is not to like? We were thrilled to be invited to attend the recent release party at the Omega Road Winery.

We have visited Omega Road Winery twice before; when we first discovered it, and again during the Harvest Festival. We loved the people, the wine, and the overall vibe, so we jumped at the chance to attend their wine release event. We arrived to find a cluster of people outdoors, appreciating the shade of a pop-up tent, and another group inside the tasting room.

We joined the throng indoors and received wine glasses from Alexandra , who told us a bit about the event. Each wine was paired with small bites, starting with their 2017 Verdelho. It was paired first with a bit of cow’s cheese on a cracker. The creaminess of the cheese played nicely with the bright citrus notes of the Verdelho. We next tasted a Thai Ginger Soup with Egg that really highlighted the wine’s spicy notes. It also caused us to decide to make our own Thai Ginger Soup at our first opportunity.

The next new release was their 2015 Reverie Rosé which Alexandra said was “largely Pinot Noir, and just a hint of Verdelho.” She also told us that $5 from every bottle sold was being donated to the Sandra J Wing Healing Therapies Foundation. The Foundation provides healing therapies, personalized navigation and education at no cost to cancer patients. Omega Road is a family business, and the family was touched by the Foundation in the past, and this was their way giving back. The Rosé was a blend of Pinot Noir and Verdello, which made it earthy and luscious. It was ably paired with a lovely mushroom ravioli which brought out the spice in the Rosé, and also a lovely truffle cheese that highlighted the rich plum notes of the Pinot.

Our final wine was their 2015 Alicante Bouschet. It was paired with a Rum Runner cheese with cherry preserve, served on a cracker. We love the earthy and spicy Alicante Bouschet, and found that the cheese accentuated the wine’s cherry notes while decreasing the smoke on the finish. We thought that it would be equally stunning paired with a nice mac and cheese.

We purchased several bottles and said our goodbyes to everyone in the winery. A very fun release party all around!

Other wineries near Omega Road Winery: